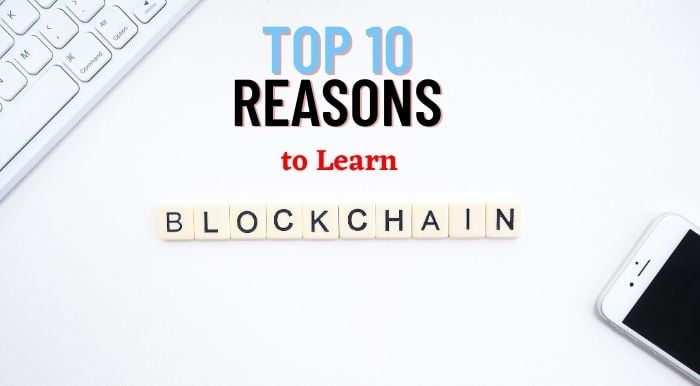 Today I’m going to tell you all about the top 10 reasons to learn Blockchain. You see, Blockchain technology is moving to fast.

You’re probably living in the past, but there are only a few employers. Well, things have changed now.

you need to take a step ahead and walk with the revolutionary technologies, where Blockchain is one of the leaders.

So here are my 10 picks on why you should invest your time in learning Blockchain. Now, let us start our countdown in the reverse order.

According to Gartner, and many other such sites, Blockchain ranks at the top as one of the most cutting edge technologies of the century.

The sort of data protection and privacy required by governments and businesses alike is provided by Blockchain in an efficient manner.

Blockchain in itself is being deemed almost as revolutionary as protocols like TCP, IP and HTTP.

There are ample opportunities waiting for you in the market. If you think you have the right skill set to work in Blockchain and get adapted to the trending wave and then swim in the sea of jobs and enjoy the power of this revolutionary platform.

8. Calculated investment in cryptocurrencies and Ico’s

There is no doubt that cryptocurrency is a word that elicits a very strong response these days. Every time Bitcoin pulls back and tries someone has something to say about it on the internet.

It’s a new asset class that has taken the world by storm since Bitcoin first hit the scene, the volatility and the market often is what leads to the fear.

But the excitement around the tech itself is outpacing that. Blockchain is an underlying technology of cryptocurrencies.

The CEO of current one said, if people are going to day trade, cryptocurrencies, as they do not know what they’re doing, they’re going to get slaughtered.

Blockchains and DLT, which stands for distributed ledger technology, essentially connects together to form a new type of market infrastructure that sits on top of and integrates into existing systems and processes.

So basically, it offers a single infrastructure and solution facility connected with other type of market.

This way you can integrate into the existing process and system.

Moving on next in the list is the most important reason for you to learn Blockchain. If you care about security and legitimacy of your data and digital security.

If you look at the current web infrastructure, you would find how vulnerable we are right now.

Which brings me to the original web 1.0 concerns about the commerce and identity online. can make credit card and number get stolen? Most definitely.

Am I being tracked almost 100%. Do they see my profile activity and password? Oh, yes. Is it safe? Well, we thought so.

There have been some unique concepts produced from a melding of Blockchain with voting systems, commodities, training, and even real estate.

But the candidate most likely to push mass adoption of Blockchain is the Internet of Things.

This ability to build a safe infrastructure for autonomous collaborations makes it easy to be creative without worrying about the veracity of their data.

Blockchain is playing a dominant role in terms of technology in the market and banking isn’t the only industry that would be affected by Blockchain,

and many other sectors could also have Blockchain in the future. With this, you can begin the shift process and ensure that transactions at the platform of Blockchain are maintained and ubiquity of value is also driven.

Now since the industries have also started adopting it, it is suspected that Blockchain is soon going to be an inflection often error.

3. Inflection point of an era

I feel the world is on the brink of another ARPANET moment, perhaps an inflection point, which will directly affect the way people do business. This moment is Blockchain.

With financial institutions acknowledging the disruptive nature of Blockchain, the predictions are that Blockchain will reach the critical mass around two zero to four.

So I would suggest that it’s better to surf waves before it’s too late.

Another important reason why you should learn Blockchain is that it can disrupt the value chain completely.

Blockchain is expected to improve confidence and fidelity between the operating parties.

it lessens the value chain breaks down the workflow and does pieces of the inter party processes.

This will in turn lead to greater Focusing of certain players in the value chain.

There is going to be a lot of job opportunities since players should be sizing up their future positions and managers should be reassessing their value in the chains.

I have high job prospects and good pay from Cryptocurrency startups that have gone on to establish their own companies.

The job market looks good for Blockchain enthusiasts, as it is expected to grow exponentially in the coming years, employers have been searching for the following job roles.

So guys, these are some key reasons why anyone should learn Blockchain.

I hope you have enjoyed to reading this article. Please be kind enough to share it. And you can comment any of your doubts and queries and we will reply them.