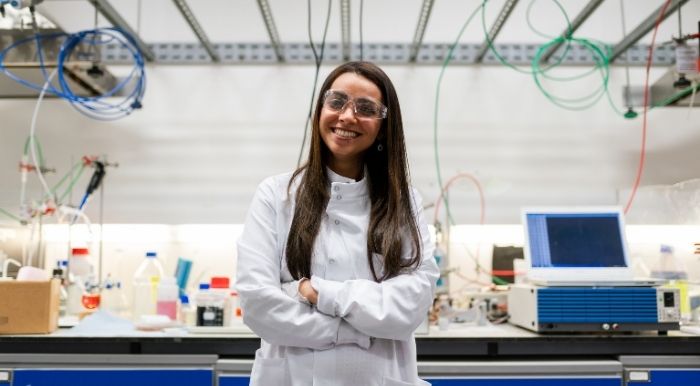 My name is Natalie Van Kleef Conley. I’m product lead for the Google it professional certificates, which are part of Grow with Google our company’s initiative to create economic opportunity.

Why we created the google IT professional Certificates

I grew up in a small town in New Jersey, the middle of three sisters raised by a single mother. My mom taught seventh-grade special education, and I have memory upon memory of the role her students played in our lives.

My grandfather used to dress up as Santa Claus and bring a big meal and presents for the kids to my mom’s classroom.

My mom instilled in us and in her students that education holds the promise of a better future. I later learned that this is true only for those who have access to it.

I was fortunate that several key opportunities helped me get the access I needed to succeed. After high school, I went on to Boston College as a very money kid out of money to institutions.

Each semester I worried about getting pulled out of college because we couldn’t afford it no matter how many work-study jobs I took on.

And then in my senior year, I received a college scholarship for my favorite professor and graduated. I never forgot the power of that opportunity.

So it’s no coincidence that carving out similar ones has been the focus of my work. Despite the challenges I had access to education, I was much luckier than about two-thirds of Americans who did not have a college degree.

I went on to spend a large part of my career in academia working in the admissions office at the Harvard Graduate School of Education.

But working full time I got my master’s there in higher education with a focus on access and equity. I was almost fully paid for by the university another powerful opportunity that unlocked access to education,

and then came to Google to join a new team focused on expanding the number of candidates from non-traditional educational backgrounds for roles in software engineering, and in IT support.

We really struggled to find qualified candidates for the IT support role. But we also knew that qualified didn’t have to mean having a four-year college degree.

I went on to run Google’s IT support program from 2014 to 2016 and forged a partnership with a nonprofit organization for low-income young adults that many of you are likely familiar with called year up.

Together, we built a training and hiring pathway into it to support internships and roles at Google. It includes an apprenticeship to summer IT internships and a full-time role in the IT Support Program.

The foundation of this effort was a full college scholarship program I launched to help your uppers get an associate degree in it at a local community college.

We built this program because I knew well the power of a college scholarship. Even though the typical graduation rate for low-income students at two-year colleges is just 13%.

Two years into our program, 87% of your offers, on average were accepted to their internships, and on track to get their degrees.

We could create real paths to jobs, we knew we couldn’t be the only companies struggling to hire IT support talent. In fact, prior to COVID, there were over 215,000 unfilled jobs in IT support in the US.

And the majority of these roles do not require a four-year college degree. They’re not just jobs, they’re good jobs. The median salary is almost $53,000 a year according to the Bureau of Labor Statistics.

So I had a kernel of an idea in my head aimed at creating more access to education. And because I’m from Jersey and I was raised by a strong woman, I was determined to see it come to life.

So we set out on this adventure to create a hands-on online curriculum design to prepare beginner learners for entry-level roles and under six months.

It was developed by a team of full-time engineers at Google who committed their nights and their weekends to helping to create it.

We launched Google IT supports professional certificates on Coursera, an online learning platform in January 2018.

More than two years later, the program is the number one most popular certificate on Coursera. Out of 1145 specializations, it’s proven to be a strong entry point for non-traditional talent into tech.

The program enrolls a high percentage of non-traditional learners 58% identify as black Latino female or veteran 61% do not have a college degree and 45% are in the bottom third in terms of income in the nation reporting less than $30,000 in annual income.

We are so proud of what our learners accomplish. they achieve two and a half times the completion rate of comparable content on Coursera 80% of the program help them advance their job search or career within six months.

So throughout this online training, learners engage in a mix of hands-on labs and other interactive assessments so that they can troubleshoot just like they would on the job.

Second, the program is designed to end to support non-traditional learners. The certificate is philanthropically funded by google.org and does not generate any revenue for Google.

It has an explicit focus on creating economic opportunity for overlooked groups with google.org funding 10,000 scholarships to support veterans, refugees, and low-income learners from select nonprofits.

We were also laser-focused on building a diverse and inclusive curriculum. So for example, we incorporated over 50 nontechnical videos into the curriculum that showcase the personal stories of Google employees.

Our learners meet an IT Support Specialist turned security engineer from the deaf community, several female executives, and a veteran of the US Navy.

They talk about coming from humble beginnings struggling with imposter syndrome and rely on grit and determination to achieve their goals.

Our curriculum is rooted in this very basic belief that it should have a heart and a soul that resonates with all learners.

Research also consistently shows the importance of social networks and labor market outcomes. And learners from overlooked backgrounds often faced challenges with the job search and interview process due to lower social capital.

So to support learners in their career search, we also embed job prep resources throughout the curriculum like a suite of Google created resume interview prep videos, downloadable IT support specific resume templates, free virtual interview practice, and a job board that features local, regional and national IT support roles.

Third, we created a direct path to jobs. We brought together a hiring consortium of around 50 National employers like Walmart, Sprint, Hulu, and of course, Google dedicated to considering hiring those who complete the certificate for their roles.

So the effort calls upon individual employers to shift their focus from competing for talent to having a joint responsibility to develop a pipeline that’s needed to build the workforce.

Fourth, we created a stackable pathway. So because its support isn’t just a job, it’s a career path. In January, we launched a follow on a program called the Google automation with Python professional certificate.

The six-course program provides beginner level training in Python, which is now the most in-Demand programming language by employers.

The IT support professional certificate was designed from the very beginning with scale in mind. And here’s how first we challenge ourselves to solve for something much bigger than the problem actually required.

Our immediate issue was that we had a hiring challenge at Google. But many other companies have the same challenge. So why not solve that.

This is why we aligned the content with the broader needs of the industry rather than focusing on proprietary enterprise-specific technologies, and the IT support professional certificate, the content, the products, the platforms that are taught are all Google agnostic.

The program is designed for learners to jumpstart their careers at any company across any sector. Second, we thought beyond the online-only nature of the program.

Inspired by the pathways to prosperity work created by Bob Schwartz, the Harvard Graduate School of Education, and Jeff, we set out to scale the program to community colleges at the system’s level.

Community Colleges, as many of you know have unparalleled reach in their communities play a critical role in workforce development, and our strong proxy for economic disadvantage. 14% of community college students in the US are experiencing homelessness, and one in three go hungry while pursuing a degree.

The third key to scale was ensuring that the program had a modular and flexible design. Because the Google certificate is broad and connects to a wide range of courses and programs.

We took a modular approach which gave faculty and institutional leaders more options to integrate or reformulate it.

They can offer learners credit for prior learning integrate the certificate into one or multiple courses within their IT curriculum or offered as a standalone and of course, faculty drive the pedagogical approach.

Fourth, there can be no shortcuts around quality. If you have a shot at scale, your program must meet the highest standards of quality both to provide a strong user experience and to gain market signal.

For example, we secured a credit recommendation from the American Council on Education Ace credit the industry standard for translating workplace learning to college credit, learners can earn 12 college credits for completing the program, which is the equivalent of four college courses at the associate degree level.

The certificate was also selected from 160 submissions as one of 10 winning programs in the US .