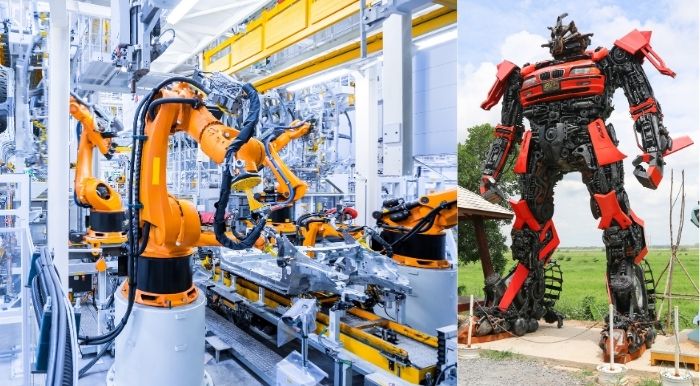 But they’re not the same. Sometimes people feel that there’s an overlap between them. And in this Article, I want to explain what this is.

Robotics is a field of engineering, they’re basically focused on building and operating Robots. So mechanical tools that can do things autonomously.

Difference between Artificial Intelligence and Robotics

We’ve seen this in manufacturing for a long time, where we have tools that can end Robots that can build cars.

But we also now have very advanced Robots that can do almost anything. And this is where the overlap between those two fields comes in, that we now can combine Artificial intelligence, and Robotics.

where basically, the Robot is the body. And the Artificial intelligence is the brain. So if you think about this, in the past, we’ve had Robot Robots for a long time building building things like cars.

But they’ve been dumb Robots, they’ve picked something up programmed to screw something into their put away onto a car spray, paint a car, but it couldn’t really intelligently make decisions.

And suddenly you have an Artificially intelligent Robot. And this is where all the advances have come from in Robotics recently.

If you think about a drone, for example, as a Robot, the brain the Artificial intelligence makes this drone fly autonomously, we now have self driving cars.

Again, combining Robotics. And the brain, the AI, a really good example is a Raspberry Pi Robot. This is something I’ve looked at recently. And basically, in the past, it would have been impossible for a Robot to pick raspberries.

However, by now, combining Artificial intelligence, and Robotics, you can now achieve that you now have a Raspberry Pi Robot that uses machine vision.

So a camera to detect where the raspberries are, and then uses an arm, a Robotic arm with lots of sensors in them to then pick the raspberry perfectly not to push it too hard, and then place it somewhere in a container to have it harvested.

And this, for me is a really good illustration of how far autonomous Robots have no come. And basically, we now also have this ability of what we call reinforcement learning. So instead of feeding a machine, lots of data to recognize a raspberry.

I’ve recently seen a Robot that is basically monitoring the environment that is learning by itself to start to walk.

And this each failure reinforces a learning point. Each success of this was a successful step. And the Robot for example, it didn’t fall over, it then registers this. So you now get this self perpetuating learning cycle where Robots can almost learn like infant to do things like speaking and walking.

And this for me is the latest evolution of these of combining AI and Robotics. So, to recap, they’re not the same. AI is about data science is about computer programming, Learn by themselves.

Robots are about machines that can do autonomous things. But by combining them AI becomes the brain.

The Robot becomes the body and he can achieve amazing things. If you would like to learn more, read more article of this Amazing blog.