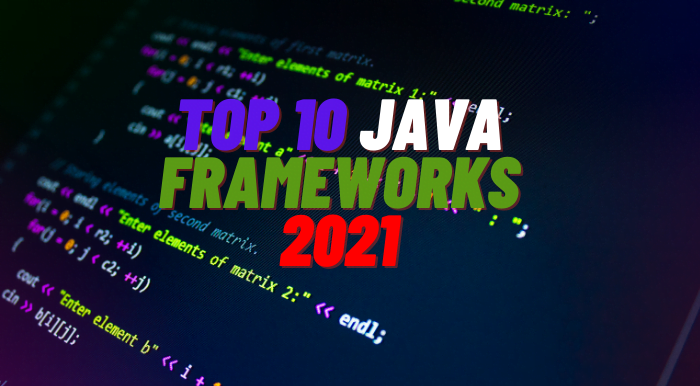 Java is one of the most powerful and highly sought Programming language in the current IT industry. The reason which many beginners and professionals are looking for a better career in Java development. For this reason, many beginners are confuse That , what exactly is Java?

And what are the leading frameworks that are in business in the current IT industry, and which is the one that could help me out to bug a job? Well, today, we will learn exactly the same, the top 10 trending frameworks in Java.

So now sit back, relax and Read to all the top 10 trending frameworks in Java.

The spring framework is a very lightweight application framework and inversion of control container for the Java platform. The frameworks core features can be used by any Java application. But there are extensions for building web applications on top of Java, ee or Enterprise Edition platform.

Some of the major features of spring framework spring helps with lightweight triggerable containers that can be used without web servers. Spring supports JDBC and reduces error probability.

Spring reduces complexity in J2EE development. And finally, spring helps with backward compatibility and testing. So the major companies that are hiring Java developers with the knowledge of spring framework on

Vaadin is an open source platform for web application development. Vaadin platform includes a set of web components, a java web framework, and a set of tools and application starters.

So now the major features of modern Vaadin enables data binding using MVC and MVP burden has built in spring support, followed by that Vaadin uses Java and HTML for building views.

Vaadin also supports JVM and compatible languages such as Java and scalar. Pardon has a bigger edge, which has the drag and drop support in creating single page user interfaces.

Apache struts one is an open source web application framework for developing Java Enterprise Edition web applications. It uses and extends the Java Servlet API to encourage developers to adopt an MNVC architecture or the model view controller architecture.

It was originally created by Craig McClanahan and donated to the Apache foundation in the year 2000. Firmly located under the Apache Jakarta project,

it is also known as the Jakarta Struts, it became a top level Apache project by the year 2005. The web framework spun off from the Apache struts aiming to offer enhancements and refinements while retaining the same general architecture of original struts framework.

Some of the major features of Apache struts are it reduces time in web application development improvisors web application manageability and struts offer centralized configuration, followed by that struts can integrate easily with other Java frameworks.

And finally, struts values are represented in the form of XML files. So the major companies that are hiring Java developers with the knowledge of struts framework are

Apache wicket, or commonly referred as the wicket is a component based web application framework for Java programming language, conceptually similar to Java server faces and paper Street.

It was originally written by Jonathan Locke and the year 2004. The version 1.0 was released in the year 2005. Some of the major features of Apache wicket are Apache advocate follows pojo model which is plain old Java object model,

The Google Web Toolkit is an open source set of tools that allows web developers to create a main JavaScript front end application in Java. Other than few native libraries. Everything is Java source that can be built on any supported platform, with included GWT and build files.

Drop wizard is a Java framework for developing ops friendly high performance restful web services. drop wizard pulls together stable mature libraries from the Java ecosystem into a simple, lightweight package that lets you focus on getting things done.

Some of the major features of dropwizard it performs rapid application prototyping Drop wizard can perform quick project bootstrap, high performance Restful API can be developed and drop wizard has support for open source libraries and finally dropwizard increases productivity at a rapid pace.

Play framework is an open source web application framework, which follows the model view controller architecture pattern. It is written in Scala and is usable from other programming languages that are compiled to JVM bytecode.

Now, some of the major features that play framework has to offer are it can detect over configuration and code duplication, detects errors and displays them in real time.

It has high flexibility and it is completely fault tolerant. And play can support non blocking input output services for high performance and real time. And followed by that play supports JVM and compatible languages like stealer.

Hibernate ORM is an object relational mapping tool for the Java programming language. It provides a framework for mapping an object oriented domain model to a relational database.

Some of the major features of hibernate are it is capable to communicate with every database via a stable connection. hibernate can perform DML and DDL operations on any relational database.

And finally, hibernate can develop persistence classes via object oriented programming style principles. So some of the major companies that are hiring Java developers with hibernate knowledge are

Blade is a light MVC framework built from scratch with some clear goals in mind to be self contained, productive, elegant, intuitive, and super fast. Many different frameworks inspired its design such as notes express, python flask.

So now let’s understand some of the major features that blade has to offer.

Blade helps to create miniature MVC applications. It enables fast production, and it can configure multiple files on the go. It is capable to process CSRF and excesses. And finally, blade supports plugins and external web JAR files.

And some of the major companies that are hiring Java developers with the knowledge of blade framework are stormcatcher and idOs.

Grails is an open source web application framework that uses the Apache groovy programming language. It is intended to be a high productivity framework by following the coding by conversion paradigm, providing a standalone development environment and hiding much of the configuration detail from the developer.

So the major features that Grails framework has to offer are, it provides flexible profiles, it can perform object mapping with ease. It provides code reusability between different grade applications, developer friendly documentation and finally it supports customized plugins for different platforms.

If you have any queries related to this Article or if you think that we have missed out any important framework, then please write to us in the comment section below and we will answer your queries as early as possible. Till then. Thank you